It’s perplexing to me that as Canadians we can unite at ungodly early morning hours to cheer on our hockey team as a country, yet when it comes to education we live on seemingly unconnected islands.

In my province, Ontario, we have just completed a “visioning” exercise, looking at how to move our public education system from “great to excellent“.  In the meantime, in what feels like a different country (because we rarely connect and share what we know), the province of Nova Scotia is about to embark on an education review.

Last week, the Province of Nova Scotia launched its urgent call for change.

The report states that a crisis exists that threatens the standard of living of Nova Scotians.  It outlines 19 goals and 12 long-term strategies that are needed to turn the economy around and stop the current decline.

Robert Sutton, in his recent publication “Scaling Up Excellence” demonstrates that using logical arguments to spread the need for change are often not effective, and we need an emotional attachment to an idea to really move change forward.  The Ivany Report, with the focus on Urgency and Mobilizing Strengths, has created this “hot cause” to “stoke the engine”.

However, critics say that the report, while strong on ideas, lacks concrete policy.

As an educator, I read the report looking for how the education system would be redesigned to meet the goals of “One Nova Scotia: Shaping our Economy Together”.  With a quarter of the population under the age of 19, it would seem that transforming an economy would certainly require a transformation in how young people were educated.  But there is very little in the report to suggest how this might occur. 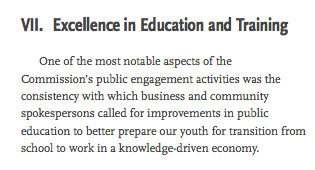 A small section entitled “Excellence in Education and Training” (combining those terms is concerning) suggests that a “rigorous curriculum review” and “setting the bar high” will hold Nova Scotians accountable for reaching their goals.

There is essentially no conversation on how a system of schooling, created with an industrial mindset, could now produce young adults who thought like entrepreneurs rather than obedient assembly line employees.

So what, then, should be the purpose of Nova Scotia’s upcoming comprehensive review of the education system?

In Ontario, we have learned that public support of public education is critical.  In our three priorities, raising the bar, lowering the gap and securing accountability, we have focused on how, as a province, we can believe in what we are doing as being the best for our students.

At the same time, research must be central to learning.  So what, then, is the role of public consultation?

Perhaps the real question Nova Scotians need to answer is “What is School for?” How can we possibly determine what is working, and what needs improvement, if we aren’t in agreement on why we have schools in the first place?

Once we know what schools are there to accomplish, there is a world of research available to help move those goals forward.  High yield strategies like assessment for learning, and student-work-study teacher initiatives are well-documented.

The citizens of Nova Scotia,  faced with the findings of the Ivany Report,  now need to deeply consider their expectations, their beliefs, and their understanding of the purpose of the school buildings in their communities, and the reasons for the hours that young people spend there every day.

What kind of person emerges from the years in the school system, and what kind of province results from that education system?

As Canadians, what do we see as the purpose of school?

The Future of Schooling: Are Students Being Prepared to “Dance with Robots”?

What should a school be?

2 thoughts on “What is the Purpose of School? Nova Scotia Considers Its Future”

Moonrise and sunset - 2022.08.12
We live in a remarkable world.
Sunset cruise.
Ghost pipes are popping up all along the Lake Superior shoreline. This week I have spotted them on Wildlife Habitat Nature Trail (Sleeping Giant Provincial Park), South Old Woman, Peat Mountain and Nokomis Trails (Lake Superior Provincial Park) and at Pancake Bay Provincial Park.
South Old Woman Trail in #lakesuperiorprovincialpark - this trail leads to magical places! Boulders, waterfalls, arctic plants, and rapids. Go get lost in here for a few hours! It’s great for the soul!
Everyone wants poutine!